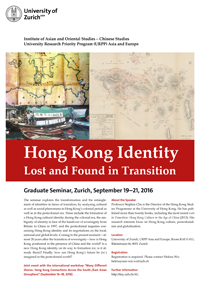 Joint event with the conference “Many Different Shores: Hong Kong Connections Across the South-/East Asian Sinosphere”

The seminar explores the transformation and the entanglement of identities in times of transition, by analyzing cultural as well as social phenomena in Hong Kong's colonial period as well as in the postcolonial era. These include the formation of a Hong Kong cultural identity during the colonial era, the ambiguity of identity in face of the handover of sovereignty from Britain to China in 1997, and the postcolonial inquiries concerning Hong Kong identity and its negotiations on the local, national and global levels. Coming to the present moment—almost 20 years after the transition of sovereignty—how is Hong Kong positioned in the presence of China and the world? Is a new Hong Kong identity on its way to formation (or, is it already there)? Finally, how can Hong Kong's future be (re-)imagined in the postcolonial world?

Prof. Chu received his PhD in Comparative Literature from The Chinese University of Hong Kong in 1993. He worked for twenty years in the Department of Chinese and Humanities Programme of Hong Kong Baptist University. He was the founding Head of the Department of Humanities and Creative Writing of Hong Kong Baptist University before becoming the Director of the Hong Kong Studies Programme. Prof. Chu has published more than twenty books, including the most recent Lost in Transition: Hong Kong Culture in the Age of China (2013). He has also published widely in journals of different academic disciplines such as literature, film, popular music, cultural policy, anthropology, sociology and legal studies. His research interests focus on Hong Kong culture, postcolonialism and globalization.

The seminar, conducted in English, is open to graduate students. Required readings (in English) will be distributed beforehand. If you are interested, please contact Ms Helena WU by email (helenayuen-wai.wu@uzh.ch) for registration before 15 August, 2016.