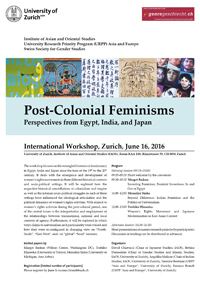 The workshop focuses on the entangled histories of feminism(s) in Egypt, India and Japan since the turn of the 19th to the 20th century. It deals with the emergence and development of women’s rights movements in three different historical contexts and socio-political settings. It will be explored how the respective historical constellations of colonialism and empire as well as the internal socio-political struggles in each of these settings have influenced the ideological articulation and the political dynamics of women’s rights activism. With respect to women’s rights activism during the post-colonial period, one of the central issues is the interpretation and employment of the relationships between transnational, national and local contexts of agency. Furthermore, it will be explored in which ways claims to universalism and particularity were voiced and how they were re-configured in changing view on “North-South”, “East-West”, and / or “global”-“local” tensions.

Discussion of readings (to be distributed in advance)