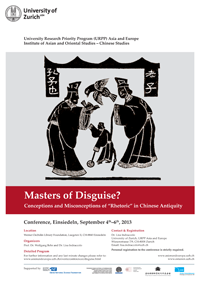 The conference is supported by the Swiss National Science Foundation, the Chiang Ching-kuo Foundation for International Scholarly Exchange, the Swiss Academy of Humanities and Social Sciences, the Swiss Asia Society, and the Zürcher Universitätsverein.

The Warring States period (475–221 A.C.) is considered the golden age of Chinese “rhetoric”, and the epoch of the maximum flourishing of early Chinese politico-philosophical debate. This historical period is characterized by the fragmentation of the legitimate central political power, and by the emergence of several independent states, ruled by local lords fighting for supremacy. In conjunction with the rise of local rulers and their exercise of patronage, the concomitant phenomenon of “wandering persuaders” developed: independent political advisers were travelling from court to court in search of an employment as officials, diplomats and counselors, and engaged in a lively rhetorical activity as part of their political commitment. However, due to their overpowering dialectical skills and their apparent lack of ethical engagement, persuaders were often harshly criticized and underrated as mere “court entertainers” by later tradition. The workshop proposes to analyze the role played by rhetoric in the Chinese pre-imperial and early imperial period, approaching the topic from a comparative Sino-Western perspective and focusing in particular on contemporary and later (mis)conceptions of this practice in the light of the Classical rhetorical tradition. It also sets out to study argumentative strategies, structural techniques and rhetorical devices employed by persuaders in building their arguments, taking into account the performative nature of their oral deliveries and the function of written texts in the teaching, transmission and performance of rhetoric in Early China.