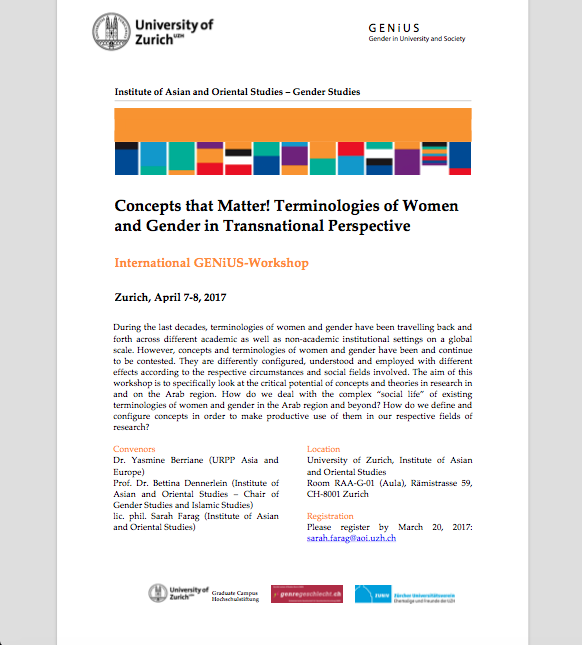 GENiUS (Gender in University and Society) is an informal Swiss-Arab Network of academics specialized in the field of Gender Studies in and on the Arab region that aims at fostering scientific exchange on the levels of research, teaching and institution building. In order to create a forum of exchange and dialogue in knowledge production across disciplinary, linguistic and regional boundaries, the network organizes a series of workshops on varying relevant topics.

The first international GENiUS-workshop takes place on April 7 to 8, 2017 at the University of Zurich (Institute of Asian and Oriental Studies – Gender Studies). It is devoted to the topic of “Concepts that matter! Terminologies of Women and Gender in Transnational Perspective”. It follows up on discussions during a first exploratory workshop held in Zurich in March 2016 under the title of “Feminism and Theory in the Arab World”.

During the last decades, terminologies of women and gender have been travelling back and forth across different academic as well as non-academic institutional settings on a global scale. These terminologies have entered the fields of international politics, human rights and development discourse as well as national programs and policies. At the same time, they are part of diverse activist concerns and strategies. Concepts and terminologies of women and gender have been and continue to be contested. They are differently configured, understood and employed with different effects according to the respective circumstances and social fields involved.

Women’s and gender studies have both shaped and been shaped by this situation. They have contributed to the reconceptualization of existing theories by highlighting the centrality of power relations, the necessity to question and destabilize social categorizations and to analyze the production and effects of distinctions in politics of difference and identity. They have been constantly negotiating the paradoxes and dilemmas of feminist interventions beyond common binaries such as universalism vs. particularism or equality vs. difference. In spite of the currency of terminologies of women and gender in public debates and policies, women’s and gender studies are under increasing political pressure from different quarters.

Key questions to be raised during the workshop might be: