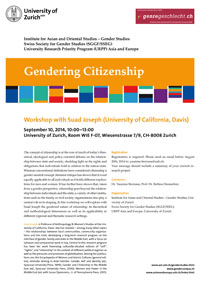 Registration is required. Please send an email before August 20th, 2014 to: yasmine.berriane@uzh.ch
Your message should include a summary of your current research project.

The concept of citizenship is at the core of much of today’s theoretical, ideological and policy-oriented debates on the relationship between state and society, shedding light on the rights and obligations that individuals hold in relation to the nation-state. Whereas conventional definitions have considered citizenship a gender-neutral concept, feminist critique has shown that it is not equally applicable to all individuals as it holds different implications for men and women. It has further been shown that, taken from a gender perspective, citizenship goes beyond the relationship between individuals and the state; a variety of other institutions such as the family or civil society organisations also play a central role in its shaping. In this workshop we will explore with Suad Joseph the gendered nature of citizenship, its theoretical and methodological dimensions as well as its applicability in different regional and thematic research settings.

Suad Joseph is Professor of Anthropology & Women’s Studies at the University of California, Davis. She has studied – among many other topics – the relationships between local communities, community organizations and the state, developing a long-term research program on the interface of gender, family and state in the Middle East, with a focus on Lebanon and comparative work in Iraq. Central to this research program has been her work theorizing culturally-situated notions of “self”, “rights”, and “citizenship” in the context of different political regimes as well as the pressures and processes of globalization. Among her publications are: the Encyclopedia of Women and Islamic Cultures (general editor); Intimate Selving in Arab Families: Gender, Self and Identity (ed., Syracuse University Press, 1999); Gender and Citizenship in the Middle East (ed., Syracuse University Press, 2000); Women and Power in the Middle East (ed. with Susan Slyomovics., U. of Pennsylvania Press, 2001)