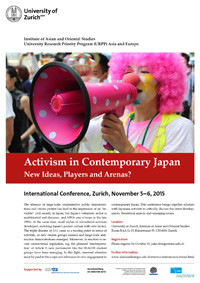 The workshop is supported by the Swiss National Science Foundation, the Hochschulstiftung der Universität Zürich, the Swiss Academy of Humanities and Social Sciences, and the Zürcher Universitätsverein.

The absence of large-scale confrontative public demonstrations and citizen protest has lead to the impression of an “invisible” civil society in Japan, but Japan’s voluntary sector is multifaceted and dynamic, and NPOs saw a boom in the late 1990s. At the same time, small niches of subcultural activism developed, enriching Japan’s protest culture with new tactics. The triple disaster of 3/11 came as a turning point in terms of activism, as new citizen groups formed and large-scale anti-nuclear demonstrations emerged. Moreover, in reaction to recent controversial legislation, e.g. the planned ‘reinterpretation’ of Article 9, new movements like the SEALDS student groups have been emerging. In this light, renewed attention must be paid to the scope and relevance of civic engagement in contemporary Japan. This conference brings together scholars with Japanese activists to critically discuss the latest developments, theoretical aspects and emerging issues.