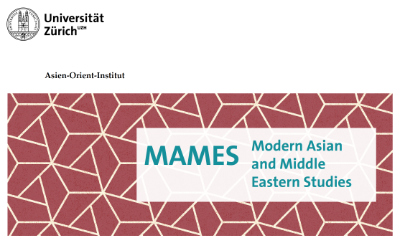 Understanding Asia and the Middle East in a Globalized World

Asia and the Middle East, from Morocco in the West to Japan in the East, account for two thirds of the global population. This is the driving force of a new world order that challenges Western dominated modernity. It includes high-growth economies and rising world powers, but also slower growth economies struggling with social dislocation.

MAMES takes you on a journey across the regions and offers you the opportunity to analyze and understand social, political and cultural change in modern times. It enables you to critically reflect on contradictions and struggles of the modern world’s colonial and postcolonial development from new, Asian and Middle Eastern perspectives.

The interdisciplinary study program MAMES is a specialized master program. Classes are in English. It focusses on the dynamics of modernization and globalization processes across Asia and the Middle East and combines methods and theoretical approaches from the cultural and social sciences.

Students acquire in-depth knowledge about the differences and commonalities between the regions as well as the analytical skills necessary to understand the interconnection between social, political, economic, cultural and intellectual issues. They are trained to explore their complexity and relate them to larger theoretical discourses and to relevant research questions. In order to be able to read original language sources, students obtain the necessary languages skills in one of Asian and Middle Eastern languages offered in the major program.

Expert Knowledge for a Globalized World

The MAMES offers a new understanding of the world and, hence, makes you fit for a career in any field that has to do with Asia and the Middle East and beyond in this globalized world. The acquired core competencies and skills to critically analyze and understand the modern world and its contradictory development from non-Western perspectives can be applied in a large field of jobs from diplomacy to international organizations, from journalism to international business, and from cultural exchange to scientific research.