After a joint welcome address by Andrea Riemenschnitter (University of Zurich) and Steve Tsang (University of Nottingham), the workshop—convened by Andrea Riemenschnitter, Simona Grano, Brigit Knüsel, Natalia Lisenkova, Helena Wu (all University of Zurich), Steve Tsang, and Chun-Yi Lee (both University of Nottingham)—was opened by Michael Hsiao (Academia Sinica), who gave an account of the development of Taiwan’s civil society since the beginning of the 1980s. The emergence of civil society organizations, which can be traced back even before the lifting of martial law in 1987, showed a paradigm shift in the state-society power relations away from state dominance over society and toward an emerging balance of power between state and society. A striking insight of Taiwan’s experience is the indigenous origin of civil society, resulting partly from Taiwan’s international isolation and the way its advocacy organizations initiated, facilitated and fostered an infant democracy for Taiwan. In recent years, as the “China factor” has become more pronounced, civil society organizations in Taiwan have increasingly responded to the growing external interference on Taiwan’s national security, democracy, social justice, and equality. 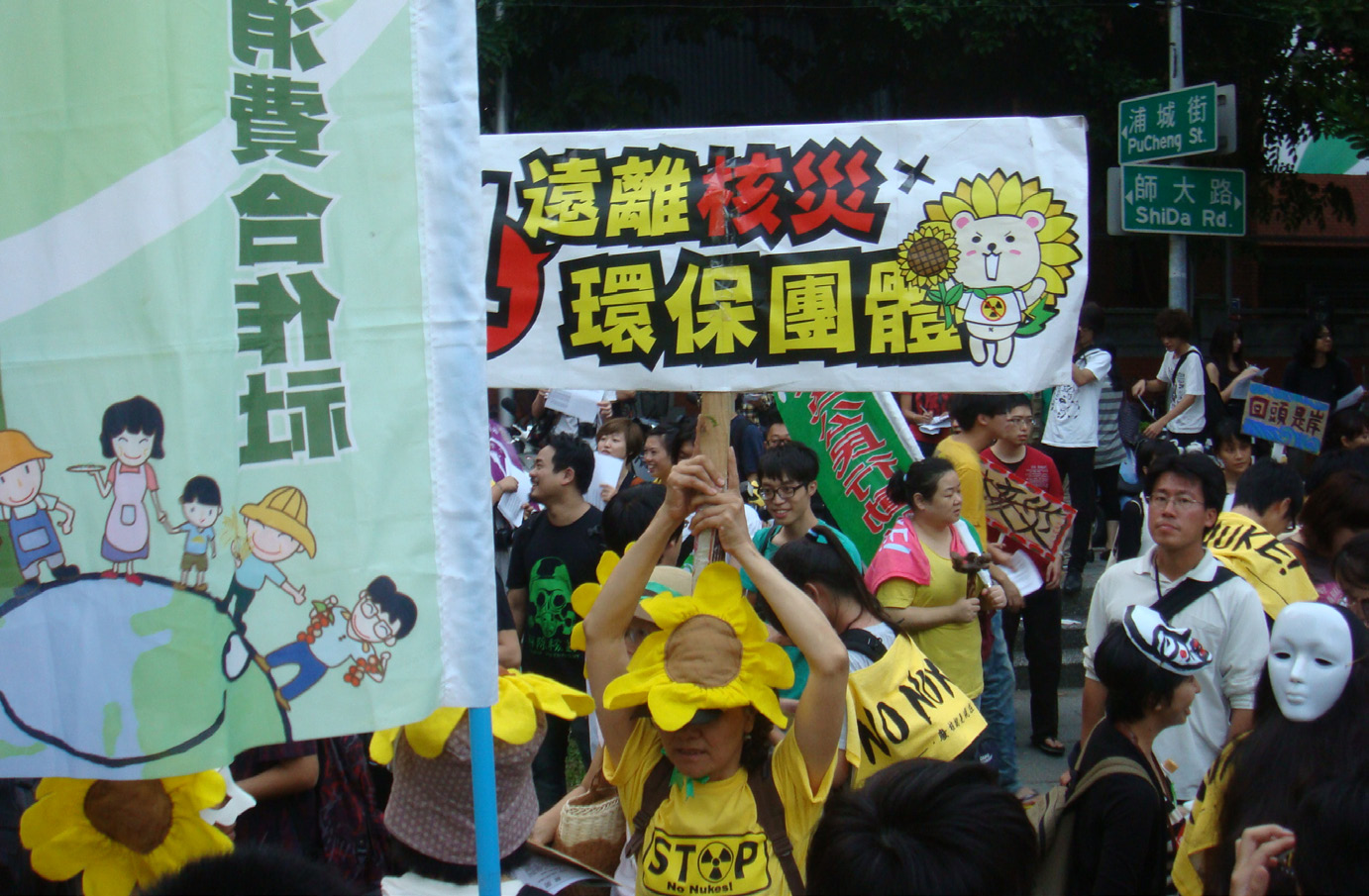 An anti-nuclear rally in the streets of Taipei. November 5, 2011. (Picture by Dr. Simona Grano)

Yang Wan-ying (National Chengchi University) discussed the position and relevance of Taiwan’s women’s rights movement within civil society. The movement, which can be historically subdivided into the three periods of “pioneering,” “awakening” and “post martial law,” has been able to achieve a number of successes. In international comparison, Taiwan has scored well on the affirmation of women’s rights. However, the movement still faces certain challenges, in particular with regard to the so-called “moral majority” within society, as well as the question of state feminism.

In his presentation on balancing the rights of workers against the economic well-being of the country, Chiu Yu-bin (National Pingtung University) described Taiwan’s rising income gap and mounting social inequality, which has been particularly pronounced in recent years. Due to rigid legislation and state interference, both the number and influence of company- or factory-based unions have been in constant decline, covering no more than 6% of Taiwan’s workforce today. In contrast, the more conservative and pro-KMT occupational unions have enjoyed a period of constant growth. Faced with a heightened neo-liberal labor policy since 2008, the financially weak and insufficiently equipped union movement has struggled to offer effective resistance. However, several high-profile strikes in recent years may indicate the emergence of a new left-wing political force in the 2016 elections.

Some fundamental questions concerning the role of civil society were raised by Shelley Rigger (Davidson College and China Policy Institute). To what extent should civil society be superior to or aloof from partisan politics, and how can it effectively negotiate its own space between state institutions? Should civil society organizations emphasize and reflect the purity and unity of the movement and avoid co-option, or rather engage in compromise policy which, after all, is an essential component of a democratic society? In this context, it was also questioned whether the wide-spread disappointment of various civil society organizations with the DPP-led government after 2000 was justified.

While the first day of the workshop focused on Taiwan, the second day examined recent developments in Hong Kong’s civil society. In her presentation, Agnes Shuk-mei Ku (Hong Kong University of Science and Technology) offered a historical retrospective of Hong Kong’s democratic movement, which can be traced back to the 1980s and finally culminated in the “Umbrella Movement” in 2014. During the early stages of the democracy movement in the 1980s, mobilization power remained limited, and it was not until June 2003, when the projected legislation on national security led to widespread mass protest, that the democracy movement entered a phase of rejuvenated mobilization power. At the same time, this period was marked by a new trend towards radicalization, stemming from forces within the pan-democratic camp, the so-called young generation, as well as radical local groups. The latest stage of civil protest in Hong Kong, the so-called “Umbrella Movement” of 2014, further witnessed both old and new forces unfolding and reshaping politics, with three distinct trends clearly visible: the transmutation into a community-based movement, the radicalization of the democratic camp in the legislation, and the rise of radical forces within the new generation of Hong Kong’s civic activists.

Malte Kaeding (University of Surrey) discussed the topic of Hong Kong’s civil society and its linkages with their Taiwan counterpart. In terms of network building, three stages could be observed in recent years. During the first stage (2008–2012), the full impact of the “China factor” became apparent in both territories, giving rise to shared interest. Resistance against national education (Hong Kong) and media monopoly (Taiwan) gave activists on both sides reasons to define their respective situations and to strive to uncover commonalities. In the last stage (since 2014), various opportunities for cooperation were explored, e.g. through conferences, workshops, and the social media sphere. This in turn led to organizational learning, regarding topics such as support and leadership structures, media strategies, and mutual emulation of protest culture.

Hung Ho-fung (Johns Hopkins University) likewise followed a comparative approach, exploring the topic of the sovereignty question in Hong Kong and Taiwan. In Taiwan, the long-standing issue of sovereignty has been a hotly contested political issue between opposing political camps: while the ruling KMT maintains that Taiwan is identical to the Republic of China, the opposition party DPP claims that Taiwan’s sovereignty status is indeterminate. By contrast, in Hong Kong the year 2003 marked a watershed. Faced with renewed nationalism and a hardening authoritarian rule in China, the discourses on sovereignty, citizenship, and self-determination for Hong Kong have been revived in recent years. While the “Mainlandization” or “Tibetization” of Hong Kong, brought about by economic integration and population engineering has become a common concern, the question of Hong Kong’s future after the expiration of the “one country, two systems” formula in 2047 is also still looming on the horizon.

In his presentation, Ho Ming-sho (National Taiwan University) again shifted the focus on the recent developments of Taiwan’s civil society. Following the KMT’s victory in the presidential elections of 2008, several “dormant” civil society movements, such as the “Wild Strawberry” or the anti-nuclear movement, have been revived and supplemented by new social forces. In recent years, these new waves of civil society struggle were able to attain a number of successes, such as the reform of the military judicial system (2013), and the halting of construction on Taiwan’s fourth nuclear power plant (2014). In recent years, the prevalent discourses within those new social movements have particularly emphasized the sense of relative deprivation, since economic growth was perceived to benefit only few, while the majority of people were left behind. Further, the “China factor” has led to an increased sense of Taiwan’s liberal rights as jeopardized though deepened and unchecked cross-Strait integration. Consequently, the concept of civil disobedience had become more acceptable to students and activists even before the beginning of the “Sunflower Movement” of 2014. Furthermore, the new cycle of protests that began in 2008 is no longer restricted to domestic issues, but even extends to topics concerning Taiwan’s foreign relations, especially relations to the Chinese Mainland.

In the last presentation of the workshop, Helena Wu (University of Zurich) once again returned to Hong Kong. In her talk on the “Umbrella Movement,” she analyzed its “artistic resistance.“ The creative output of the movement became visible in everyday life, such as in paintings, songs, photographs, moving images, poems, or street art. In this process, ordinary objects of everyday life were put to alternative use, being transformed into icons of the movement. Of particular significance is the Lion Rock, an epic landmark of Hong Kong, which had served as a symbol of spiritual and moral support for Hong Kong’s people since the 1970s, and which has now been appropriated and redefined by activists of the “Umbrella Movement.”