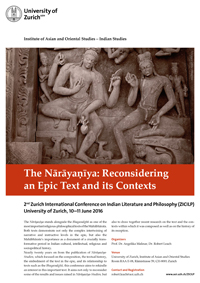 The Nārāyaṇīya stands alongside the Bhagavadgītā as one of the most important religious-philosophical texts of the Mahābhārata. Both texts demonstrate not only the complex intertwining of narrative and instructive levels in the epic, but also the Mahābhārata’s importance as a document of a crucially transformative period in Indian cultural, intellectual, religious and sociopolitical history. This period, spanning approximately the first few centuries of the common era, from the establishment of the Kuṣāṇa empire to the early imperial rule of the Guptas, witnessed the emergence and/or consolidation of, among other phenomena, new monotheistic religions espousing a devotional religiosity (bhakti) which drew upon both Vedic sacrificial norms and the ideals of liberation-seeking renunciant traditions, new forms of worshipping images of god in temples and at shrines, and new ideas of kingship and of Brahmanical hegemony beyond the ritual sphere. Like the Bhagavadgītā, the Nārāyaṇīya forms an integral part of the Sanskrit Mahābhārata but has frequently been extracted from it, and studied as a distinct textual unit. This is also reflected in the fact that, like the Bhagavadgītā, it has been considered an authoritative text in its own right for certain medieval Vaiṣṇava traditions.
Nearly twenty years on from the publication of Nārāyaṇīya-Studien, which focused on the composition, the textual history, the embedment of the text in the epic, and its relationship to texts such as the Bhagavadgītā, this conference aims to rekindle an interest in this important text. It aims not only to reconsider some of the results and issues raised in Nārāyaṇīya-Studien, but also to draw together recent research on the text and the contexts within which it was composed as well as on the history of its reception.