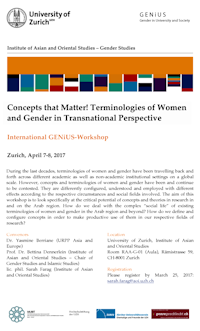 A cooperation with the Swiss Society of Gender Studies (SGGF).

This two-day workshop “Concepts that Matter! Terminologies of Women and Gender in Transnational Perspective” took place on April 7-8, 2017 at the University of Zurich. It was funded by the Institute of Asian and Oriental Studies, UZH Hochschulstiftung, MUBIT and ZUNIV. It is the first official activity of GENiUS, an informal Swiss-Arab network of academics specialised in the field of Gender studies in and on the Arab region, established in 2017. The workshop was the first of a series of workshops to be organised by GENiUS. Its builds upon a first exploratory workshop in March 2016 on “Feminism and Theory in the Arab World”, which was also held at the University of Zurich.
A major aim of the event was to take a closer look at the critical potential of existing research concepts and theories in and on the Arab region. Discussions evolved around their situatedness in various contexts of knowledge production and knowledge transfer and their usefulness in creating new feminist epistemologies relevant to the Arabic speaking MENA region. Papers given by scholars from different disciplinary backgrounds and research areas examined both the productivity as well as the limits of existing terminologies of women and gender and of theoretical concepts of feminist scholarship working in and on the MENA region. At the intersection of scholarship and activism, some of the speakers’ contributions to the workshop was based both on their academic experience as well as their close connections to feminist activism in the region.

In search of new grounds
The papers presented covered an array of topics, starting with wide ranging theoretical questions of how to access and understand feminisms in the MENA region, investigating the different notions of feminism in their historical contexts and asking how to localise and conceptualise Arab feminisms from a transnational perspective. The question of Islamic feminisms – both with regard to their meanings as well as the term in itself – was once again a crucial one, even though the different papers agreed on the necessity to move past common binary analytical frameworks of secular, “western” oriented feminisms as opposed to Islamic/religiously based feminisms. Against these conceptualisations, several positions in the workshop suggested searching for new ways of understanding and framing aspects of gender justice in the Middle East. They explored the concepts of equality and empowerment as a means to understand local initiatives concerned with women’s rights and gender equality more precisely. Both the presented papers and the following discussions highlighted the need for new narratives of Arabic feminist genealogies and new ways of conceptualising and theorising them. Thus, the workshop not only was able to create a mutual agreement on ongoing challenges to Middle East Women’s Studies, but also to provide a highly fruitful basis for future discussions and exchanges within the GENiUS network itself.

On Terms and Terminologies
The workshop also investigated aspects of translation and translatability of key concepts and terminologies such as gender, feminism, (hetero-)normativity, (homo-)sexuality, queer and other. Equivalent terms in Arabic were put forward, but questions of how fruitful close translations of existing terminologies in fact are were also discussed. Once again, the need for an Arabic terminology of gender, that is commonly agreed on and acknowledged throughout the region, was highlighted during the presentations and discussions. It was made clear not only how complex issues of actually creating new languages are, but also how these both inform and transform subjectivities and need to mediate between self-positionings and attributions from the outside.